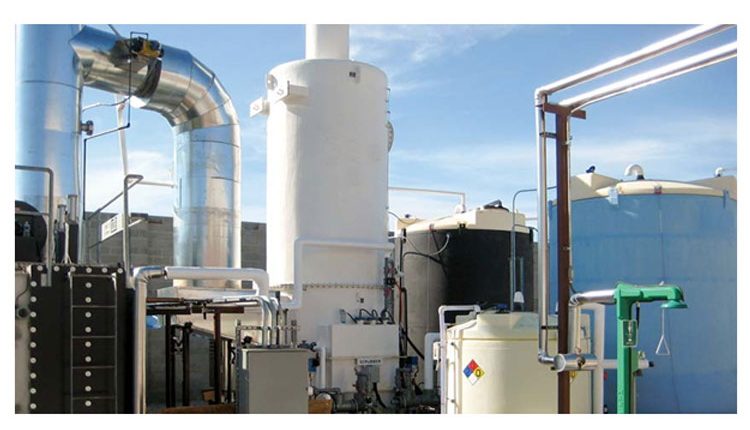 Globally, concern over environmental degradation is on the rise. This unfortunate phenomenon is likely to result in a variety of business opportunities, including water and wastewater treatment, waste management, and air pollution control equipment (APCE). High urban air pollution levels around the globe – from Thailand to Chile – promise an especially active market in end-of-pipe APCE.

According to a research by Frost & Sullivan, the APCE market in India will be rapidly growing. In 1998, this market generated $62.8 million in revenues. After a slight decline in 1999, which was largely due to the slow implementation of infrastructure projects, political instability and the overall slowdown of industrial growth, the market grew through 2005.

The Indian APCE market is a layered market with multiple segments like scrubbing systems, filtration systems, electrostatic precipitators, and other systems such as cyclones, oxidation systems, and de-nitrification systems. Contingent upon implementation of planned power projects, this market grew phenomenally in the years to come.

Stricter implementation of stringent ecological regulations is expected to boost demand and drive revenue growth. Rapid growth in the infrastructure sector is also likely to increase the demand for APCE. Another boosting factor is the growing public awareness about pollution. India is still a developing country and the theory of pollution prevention rather than control is likely to hinder market growth.

It is only natural that fresh opportunities are going to emerge through technological developments in other pollution control systems like de-nitrification, better rapping systems and retrofitting of existing equipment. The notion behind product recovery systems is a crucial customer trend that is expected to attract buyers.

A research conducted by the environmental industry has aspired to integrate the market engineering consulting philosophy into the entire research process. This research covered areas like: identification of industry challenges, market engineering measurements, strategic recommendations, planning and market monitoring. Incidentally, all the elements of this system are singularly aimed at helping the market participants navigate successfully through the world test and measurement equipment markets.

Way back in 1996, the Supreme Court of India had put stringent regulations on air polluting activities in the country. The Union government regulatory body, the Central Pollution Control Board (CPCB), has been monitoring ambient air quality since 1984 regularly to assess the effectiveness of pollution control measures on air quality. The monitoring network was started with only seven stations in Agra, and extended gradually. Ambient air quality was being monitored at 593 monitoring stations covering 249 cities/towns in 29 states and five Union Territories of the country till June 30, 2015.

Among the 249 cities monitored by the NAMP only 16 cities are providing data on air pollutants through the online portal managed by CPCB. Government’s regulatory measures and other initiatives, supported by the judiciary, have led to improvement in the country’s air quality. In many cities like Delhi, Mumbai, Chennai and Kolkata, air quality has improved significantly after implementation of the measures since 1996. However, the air quality has deteriorated in the past two to three years owing to a steep rise in vehicular numbers and industrial activity.

A recently published, World Health Organisation (WHO) report, placed 13 Indian cities in the 20 most polluted cities of the world. Interestingly, Delhi tops the chart and has six times the levels of particulate matter in the air than are considered safe.

However, it seems the only way to rein in the increasing pollution levels across cities in India is to balance growth aspirations with concerted pollution control initiatives. A case in point is the decision of the Delhi government resorting to radical measures backed by the Supreme Court’s three-month ban on 2000 CC and above diesel vehicles registration in order to control the alarming levels of air pollution. This may set a precedent and force other state governments to work on a roadmap for limiting air pollution level in the city.

As per the 2020 ‘climate action plan’ India will cut emission intensity by 33-35 per cent by 2030 over the 2005 levels, boost clean energy in electricity generation to 40 per cent while adding carbon sinks – tree and forest cover to remove carbon dioxide from the atmosphere – amounting to 2.5-3 billion tonnes of CO2. Climate action is estimated to cost India $2.5 trillion.

It is evident that it is easy to formulate emission control norms but implementation is not all that easy. Next to vehicles, generator sets are the major contributor to pollution caused by diesel. Generally, generators are used in apartments, malls, hospitals and telecom towers. Although emission norms are in place for generators, no one knows if anybody follows them.

Here we have endeavoured to provide a detailed analysis of this opportunity, undergo industry wise demand side assessment for different APCE, current market size and market share of different OEMs, projected market size, regulations and policies that will drive industry growth. The purpose of this article is to enable stakeholders to take informed decision related to India market opportunity in Air Pollution Control Equipment market that’s bound to grow exponentially.

Compacting your way toward a greener tomorrow

Waste to energy may not be a brilliant idea, yet

HRS PSL: Successful restart for the chemical industry in…