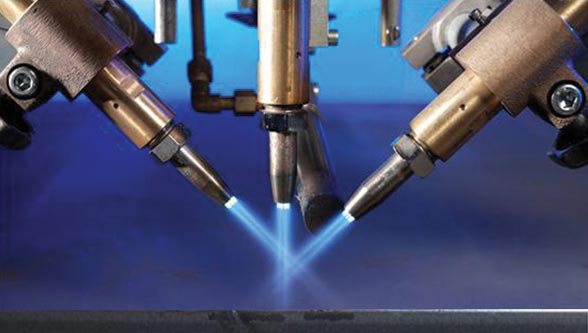 The paper examines welding and cutting process trends in the sheet metal and plates used in various industries like automobiles, infrastructure, ship building, aerospace industries, wind tower manufacturing etc. Productivity gains in arc welding are reviewed, and the increasing use of laser cutting and welding, as well as laser-arc hybrid welding, particularly in Europe, is discussed and explained. Some friction technologies are already widely adopted, but they could make more impact with further development. Electron beam welding could also be used with economic benefit in some situations, but as with all non-arc processes, it will only be adopted if significant gains in productivity and cost reduction can be created to justify the more specialist welding equipment required. Many productivity improvements can come fromw non-welding activities in the fabrication process. 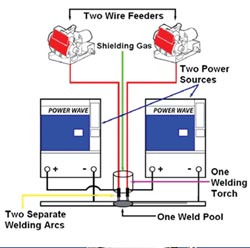 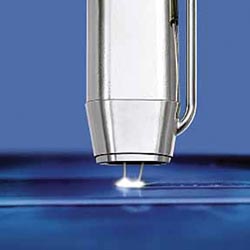 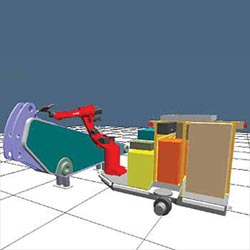 Tandem MIG And Robotic Welding
Significant improvements in productivity are nowadays hard to gain in this mature process. In gas-shielded MIG/MAG processes, the growth of tubular wire over solid wire is still slow despite the deposition and bead shape benefits of the former although tubular wire usage is higher in the USA and Japan compared to other parts of the world. The lower price of solid filler wire, particularly in Europe, is still a dominant factor that continues to favour their use. Self-shielded cored wires are still widely used in the USA but less so in Europe because of the fall-off in fabrication of large offshore installations. Care is always needed in selecting self-shielded wires if weld metal toughness is a critical design factor.

Schematic of Equipment for Tandem MIG, Advantages of Tandem MIG

The greatest potential for productivity improvements comes from using robots. Japan still leads the work in new robot installations per annum, but generally robot take-up for welding is still majorly for the automobile sectors. Robots are being employed in situations where product repetition and/or tonnage throughput are high, combined with relatively standardised designs. Robot profile cutting is increasing in usage and in Japan, some building frames are now being welded on robot lines and agile robots are also used for site welding building column joints at height. The applications most suited to robot use involve butt and fillet welds in the fabrication of beams, welding of stiffeners to beams, welding of end plates and the assembly of panels or decking.

A likely trend is to ‘take robots to the work’ and use them for large part and sub-assembly manufacture in cells which house autonomous vehicular robots. These robots, mounted on moving platforms are manoeuvred around the parts to be welded and are capable of all-positional welding using the MAG process with tubular wires, (Fig.2).

Narrow Gap Saw
In submerged arc welding, multi-wire, iron powder additions and narrow gaps are common ways to increase productivity. However, the use of tubular wires is increasing in popularity and can offer better weld quality compared to solid wires in some situations, e.g. when submerged arc welding of primed plate. In building and bridge construction MIG/MAG welding is more suited to automation and is now beginning to replace submerged arc welding, reducing costs and distortion significantly.

Laser – In Cutting And Welding
Low power CO 2 lasers were originally developed in the late 60s for cutting and welding operations, while Nd: YAG lasers entered the market only in the early 1980s. In the shipbuilding and off-road vehicle sectors, higher power lasers (3-10kW CO 2 and 2-4kW Nd:YAG) have become popular in the last decade because their use brings more precision in dimensional control, and greater accuracy in assembly, as well as the additional advantages of high cutting and welding speeds, and cleaner working.

Laser cutting is now an essential route to accurate assembly in steel fabrication. Parts can be cut to a precision of ±0.3mm in 10 metres compared to ±1-2mm for conventional plasma cutting. Sub assemblies can then be arc welded to tolerances of a few millimetres in 15 metres, with the same lasers being used for marking and hole drilling on the cutting table. Even though arc welding is still regularly used for assembly of laser cut parts, cost reductions can be dramatic because of the improved accuracy of assembly and the potential for eliminating distortion correction and other processing operations downstream from welding. Direct costs have been cut by up to 50% using lasers for cutting in many shipyards, and this shows the extent of benefit which could follow from more widespread use of laser cutting in building, bridge and public infrastructure construction.

Laser-Arc Hybrid Welding
There is tremendous interest in the use of CO 2 laser-arc or Nd: YAG laser-arc for steel construction at the present time. The concept has been around since 1978 and was actively developed in Aachen in the late 90s using high power CO 2 lasers in combination with one or two MAG torches directed into the same weld pool in series with the laser. Already one shipyard in Germany has such a system in production on a panel line, the process replacing submerged arc welding. The advantages of moving from simple arc processes to a hybrid laser-arc system include higher joint completion rates and associated control of distortion. As noted above, laser systems alone are usually not sufficient to cope with variations in joint gap in large structures. However, where plates are thin, it is possible to produce stiffened panels successfully by laser welding.

Friction Technologies
There have been many exciting developments in friction welding and probably more process innovation in the last decade than in the previous 40 years when friction welding first came on the scene. In the context of metal joining and construction, friction stud, radial friction and friction stir welding are good examples of more recent approaches, with friction stud already being used in the production of sandwich structures comprising steel skins and a concrete core and for welding attachments in high volume such as shear connectors and reinforcing bars to end plates. Attachment of anodes under water to offshore installations using steel studs and electrical connections to railway lines are other applications of friction stud welding.

Electron Beam Technology
There have been several key improvements in this process in the last decade which have made EB welding increasingly attractive for large-scale fabrication of steel structures such as buildings and bridges. The two main areas of improvement are in gun development and reduced pressure technology.

Reduced pressure electron beam welding system
Reduced pressure EB welding using chamber pressures of around 1mbar has been another major step forward in simplifying EB welding operations. The beam shape and beam penetration at, say 5mbar, is identical to that at the more conventional pressure for EB welding of 5 x 10 -3 mbar. This reduced pressure option does away with the need for large vacuum chambers and worries about leaks and seals. Simple mechanical pumps and local seals are sufficient to achieve ~1 mbar. These systems are also more tolerant to fluctuations in working vacuum pressure, gun to work distance and work-piece cleanliness.

Concluding Remarks
Where will engineering construction be in five years time? Productivity improvements can come from many different areas in the total fabrication process, e.g. general design, detailed design, contract drawings, CNC instructions, cutting and profiling, welding, inspection, finishing etc. It needs to be realised that optimising the welding process and procedure in isolation may have only a small effect on overall productivity. As an example, fabricators in the bridge and building sector continue to make big improvements in reducing the cost per tonne of steel fabricated by focussing on efficiency improvements in non-welding operations.

These non-welding areas will continue to receive much attention in the next few years. For example, 3D solid modelling is expected to be at the heart of the improvement process enabling virtual assembly, direct instruction of cutting and welding machines, computer modelling of metal processing and welding operations and optimising of welding sequences. In addition automated inspection and data gathering will increase in usage to give more comprehensive Quality Assurance. Productivity improvements could also come from greater standardisation in steel specifications and in joint details and from modularisation of large structures to reduce the time spent on site fabrication and erection.

Use of new welding processes and an increased use of automation and robots will take place slowly and gradually, only being justified where the introduction creates significant gains in productivity or cost reduction. As such, these changes can be expected particularly in situations where skilled labour is short, where welding cells can be kept fully occupied or where customised, made to order components are needed.