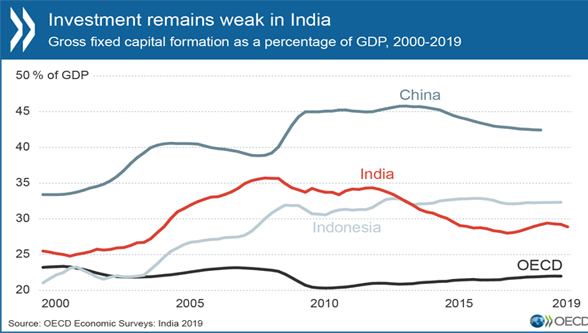 India is set for a modest recovery after a loss of momentum, as reforms to simplify taxation, lighten business regulations and upgrade infrastructure start to bear fruit. Further reforms to modernise the economy are now needed to drive the creation of high-quality jobs, as well as measures to improve public services and welfare, according to a new OECD report.

The latest OECD Economic Survey of India notes that while India has greatly expanded its participation in global trade in recent years, private investment remains relatively weak, the employment rate has declined amid a shortage of quality jobs, rural incomes are stagnating, and per-capita income varies considerably across states.

“India is now well established as a growth champion and a major player in the global economy,” said OECD Chief Economist Laurence Boone, launching the Survey in New Delhi. “However, this slower pace of growth underlines the need to fully implement existing reforms and continue lowering barriers to trade to generate the investment and jobs India needs to raise living standards across the country.”

The Survey sees India’s GDP growth recovering to 6.2% in 2020 and 6.4% in 2021 after dipping to 5.8% in 2019 following several years of robust growth. Restoring growth to the higher levels needed to provide ample jobs and ease inequality will require accelerating the pace of structural reforms to revive investment and exports.

Improving the health of the financial sector, where the share of non-performing loans has declined but remains high, will be key to supporting investment. The Survey recommends speeding up bankruptcy procedures and improving governance in the banking sector.

India has ramped up its participation in international trade since slashing tariffs in the 1990s. Its share of global goods and services exports reached 2.1% in 2018, up from 0.5% in the early 1990s, thanks to a strong performance in sectors like information technology and pharmaceuticals. Addressing remaining infrastructure bottlenecks by modernising ports and adding roads will be key to boosting India’s competitiveness. Reducing restrictions to services trade imposed by trading partners and by India on imports would further boost trade in services, also giving a lift to manufacturing and the general economy. OECD estimates suggest India would be the biggest beneficiary of a multilateral cut in services trade restrictions. Even without a multilateral agreement, moving alone to overhaul regulations would have a positive impact.

While many millions of Indians have been lifted out of poverty in recent years, too many have no formal employment benefits and little access to finance. Doing more to simplify complex labour laws – many of which discourage hiring by becoming binding as firms grow above stated thresholds – would help raise the share of quality jobs demanded by a fast-growing and well-educated youth population in a country where the vast majority of employment is informal.

The government has made some headway improving access to electricity, drinking water and rural roads. Housing shortages, and poor access to basic amenities, remain acute, particularly in rural areas. Population growth and urbanisation will add to housing pressures already estimated to affect some 40 million households across the country. Developing the currently small rental market could help achieve a pledge to provide a house for all Indians by 2022. Finally, mobilising more revenue from property and personal income taxes could create the fiscal space to raise spending on health, education and social transfers.