The grim picture of our economy has come to the fore after the government released the economic data for the Q2, 2020-21. However, the dismal picture was in the making for quite some time. This is no act of god as the Union finance minister, Mrs Nirmala Sitharaman, has so vociferously claimed and which has been equally vociferously refuted by, none other than her economist husband, Mr Parakala Prabhakar. In this article we will take a look at the devastation.

Recently, the government released economic data for the second quarter of the current fiscal. According to which, gross value added (GVA) for the country declined by 23.9 per cent, manufacturing by 39.3 per cent, and mining by 23.3 per cent.

Gross fixed capital formation (GFCF) contracted by 52.9 per cent, electricity 7 per cent, and construction activities 50.3 per cent. Agriculture and allied activities, meanwhile, were a bright spot, growing 3.4 per cent during the quarter.

Estimates put out by Bloomberg had predicted GDP for Q1 to slump by 19.2 per cent, although other economists had pegged the fall slightly higher.

The Indian corporate sector, already grappling with a weakening macroeconomic scenario, faced major disruptions because of the Covid-19 pandemic and the following two-month long nation-wide lockdown imposed to combat the same. Cutting across sectors, the impact of the outbreak and lockdown was visible in the financial performance of corporate entities in Q1 FY2021. An analysis by the credit rating agency, ICRA, of financial results of 489 companies in the Indian Corporate Sector (excluding financial sector entities) showed a Y-o-Y and sequential contraction in revenues with aggregate revenues contracting by 31.1 per cent on a Y-o-Y basis in Q1 FY2021. During the same period, the PBT margin contracted by 498 basis points on a Y-o-Y basis, and by 70 bps sequentially to multi-quarter lows of 3.6 per cent.

Strictures clamped down on manufacturing, industrial, construction and consumption activities for the major part of Q1 FY2021 due to the nationwide lockdown primarily hurt the financial performance of the Indian corporate sector.

The contraction in revenues was visible across most major sectors, but it was sharpest in the consumer-oriented sectors where revenues contracted to nearly half of the year-ago levels, given customer wariness to effect purchases, especially large-ticket ones, because of the uncertain economic environment and erosion of purchasing power. Sectors like airlines, hotels, retail, automotive, consumer durables, etc., which primarily comprises discretionary purchases, were significantly impacted, while other consumer-oriented sectors like FMCG and consumer foods were relatively less impacted given the essential nature of these purchases. 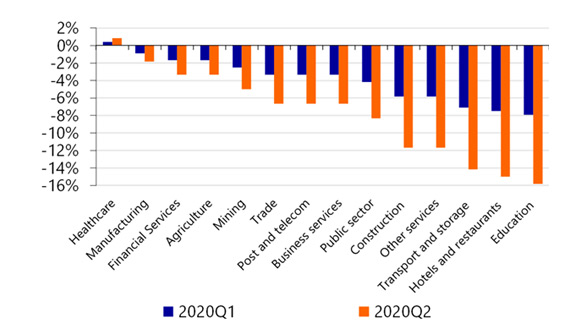 Almost negligible revenues for the major part of the quarter, which impacted the absorption of fixed overheads, and lower realisation in commodity sectors (especially metals and oil and gas), weighed on the profitability of India Inc., with PBT margins contracting to multi-year lows. And this situation was in spite of the benefit of subdued raw material prices and favourable rupee movement in select sectors like IT.

The key sectors which witnessed a sharp margin contraction included airlines, hotels, retail, healthcare, gems and jewellery, etc. Acute contraction in revenues, given the restrictions on operations, impacted the absorption of fixed overheads in these sectors and many of them struggled to cover even operating costs. However, in contrast, profitability indicators were relatively stable in sectors like cement, FMCG and power, supported by commodity tailwinds in a challenging demand environment.

Given how they suffered during the lockdown period, it is likely a good many migrant workers will stay back in their villages, preferring to earn a livelihood in the agri-rural economy. In view of the very limited opportunities though, especially at a time when the economy is decelerating, the majority will probably have no option but to take the train back to industrial centres.

In fact, Larsen & Toubro has seen its workforce increase to 1,20,000 from 70,000 in the last fortnight and is adding 2,500-3,000 workers every day. However, given the dangers of the Covid-19 pandemic, it is important they are housed in clean premises and are covered for health and medical benefits. Whether they are local labourers, living close to the factory premises, or migrants, from now, employers will have no option but to ensure that workers are looked after.

As S Ramadorai, chairman of the National Skill Development Agency (NSDA) and also of National Skill Development Corporation (NSDC), pointed out in an interview recently, the living conditions of workers in the cities are truly appalling; it is unacceptable that four dozen people are sharing a toilet in slums like Dharavi. The numbers are large—even if around 60-70 per cent of about 100 million migrants go back to the states where they were employed, that is 60-70 million people—so there can be no overnight solutions. But India Inc and the local governments must work together to start addressing their needs.