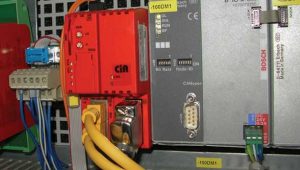 Automation technology is characterized by ongoing technological development. In such a dynamic world it can always happen that a new solution is needed simply because individual components suddenly do not match anymore. b+m surface systems was confronted with such a situation, when a component supplier was not able to provide the support of modern real time Ethernet protocols. The solution was as simple as effective and came in form of a protocol converter that even offered a number of additional benefits. b+m surface systems was founded in 1992 and soon developed into a specialist of application systems for water-based paint. Today, b+m surface systems offers the complete technology spectrum from conventional painting systems all the way to fully automatic paint application solutions including the related automation technology. Besides its headquarter in Eitersfeld, Germany, the company also operates subsidiaries in Poland and Russia. b+m surface systems produces all key components itself. This includes painting robots, atomizers and paint changing systems. Even the hard and software components for process automation are developed in-house and tailored to the special requirements of automated paint shops.

A typical painting system consists of several stations for sequential operation. The process starts with flaming the work piece, followed by the application of several coatings: first a primer, then a base coat and finally a clear coat. Coating itself is done by application robots without any human intervention. These robots are programmed in a way to guarantee application of the required coats with an absolutely even thickness. Paint supply of the robots is handled from a central paint preparation section, where the required coating materials as well as flushing agents to clean the nozzles are provided. Besides an engineering station, several industry PCs are used to control both process technology and material transport technology. They are assigned to each of the application stations for flaming, primer, base coat and clear coat. At process control level, b+m surface systems relies on Beckhoff IPCs, while RH04.0 Bosch-Rexroth robot controllers are employed at field level. Communications between both levels is accomplished via a CAN interface. An integrated CAN/CAN gateway connects the external CAN bus to the IPCs of the internal CAN bus with the individual robot controllers. 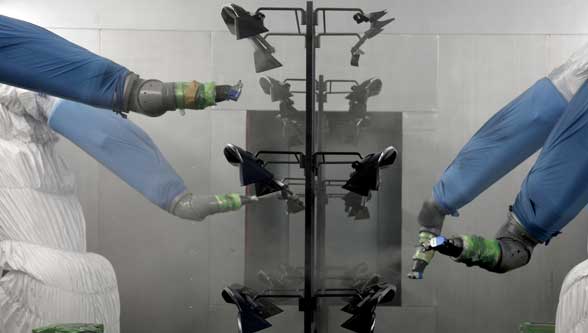 Generally speaking, a process control system is designed on the basis of highly specific goals and requirements. This includes the selection of matching hardware components and connecting them through the most suitable network technology. With the automatic paint application systems of b+m surface systems, this resulted in the use of multiple protocols matching the specific requirements associated to different functions. For example, the PC in the control center was connected to the paint preparation section via PROFINET, while the connection of the individual field devices within the paint preparation section was realized via a special I/O interface. CANopen was used for real time communication between the PCs in the control room and the individual application robots, while all controllers communicated via Ethernet and TCP/IP.

When protocols represent a disadvantage

Technical development does not stop. b+m surface systems was confronted with this fact in connection with its robot controllers. Because their painting solutions are used in many countries, the company wanted to cover the complete range of today’s Ethernet based communications standards. Bosch-Rexroth, however, only offered CANopen, but none of the modern real time Ethernet protocols, such as EtherCAT, PROFINET IO or EtherNet/IP which is the primary standard in the US-American market. This forced the company to look for an alternative solution. As it turned out, the situation was anything but inopportune, since experience had shown that the existing solution had several disadvantages. For example, the CAN/CAN gateway not only required quite a lot of space in the switching cabinet. It also made it rather difficult to commission a system, since getting the gateway to work required a specialist with detailed knowledge about network configuration. 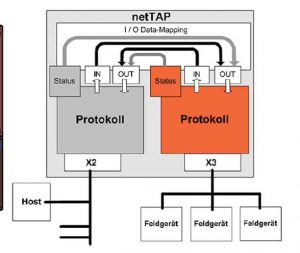 The real time Ethernet protocols were originally developed on the basis of field bus protocols and do not only offer the functionality of data communication, but also reflect logic structures of the slave components involved. Depending on the communications standard this can lead to considerable complexity. In real-life, however, the situation is totally different. For example, while commissioning the control system for a painting application, guaranteeing a stable painting process is the primary focus of attention. This means, that a gateway needs to be commissioned quickly and easily without the on-site staff needing to have comprehensive configuration knowledge. b+m surface systems decided to look for an alternative solution, which would neither require high investments nor extensive alterations of the existing system architecture. They ended up with Hilscher from Hattersheim in Germany. Hilscher is specialized in infrastructure components for system automation and has deep knowledge of the different network communication protocols. Therefore, the specialists at the b+m surface systems Hattersheim head office did not take long to find the ideal solution to solve the communications problem. The solution is named netTAP Gateways and is a rather inconspicuous and highly compact component. Unlike the previous gateways it requires only very little space in the switching cabinet. NetTAP is a protocol converter and serves to link totally different communications networks. It was developed after realizing that from ERP via process control to field level a wide variety of different network protocols are used. The reason is that at each level there are specific requirements as far as data volume and transmission speed are concerned. NetTAP acts as a gateway between two networks. The device automatically handles the translation between two different network protocols, thereby allowing a seamless and transparent flow of information.

In modern automation technology, netTAP offers a simple way to modernize a system without having to replace existing field devices. This is a highly welcome factor for any company wanting to protect its investment while improving system performance. Implementing the converter is very simple and only requires to select the respective protocols via a configuration interface, setting the network parameters and assign the data to both protocols. For this purpose, the converter features a USB interface to allow easy configuration by simply connecting a notebook. For the paint application systems of b+m surface systems, Hilscher suggested its model netTAP 100-RE-CO, which is able to link EtherCAT to CANopen, thereby allowing unlimited real time communications between both protocols. This model is a protocol converter with two terminals and can be configured by simply loading the respective firmware and configuration data. Terminal X2 can be either an Ethernet or a fieldbus interface. Terminal X3 can be a fieldbus, Ethernet or serial interface. Both terminals are located at the front of the unit. In addition, the unit features a USB interface. It allows for example to connect a notebook in order to manage configuration and diagnosis of the device. For this purpose, Hilscher offers its proprietary SYON.net configuration and diagnosis software. 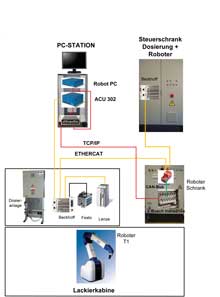 Mediator in the jungle of protocols

Due to a high level of conformity with the CANopen standard, first obstacles during verification of the products were overcome quickly. Since b+m surface systems has been working with the Bosch RH04.0 controller for some time, some of the original functionalities are still being used. In this respect, the perfect implementation of the CANopen standard into netTAP 100-RE-CO was of great help. In addition, the Hilscher support team was willing to offer any assistance needed, which accelerated the change to the new solution considerably. In the end b+m surface systems was highly satisfied with the newly implemented solution. Thanks to netTAP, they did not need to develop a completely new solution but could continue using the existing and well proven hardware and software basis. Another advantage was the fact that the Hilscher protocol converter only required a fraction of the cabinet space when compared to the previous CAN/CAN gateway. In addition, the simplicity of commissioning eliminates the need for any costly training courses for robot programmers, allowing on-site staff to focus on the application itself as well as the overall functionality of the system.

The high number of protocols that can be handled makes the solution fit for the future. Since this includes also standards which are preferred in many countries outside Europe, the Hilscher protocol converter netTAP did not only turn out to be an elegant solution for the initial problem, but also paves the way into the future. One added advantage became obvious during practical application. Due to the extremely short latency of the gateway it was possible to speed up communication between robot switching cabinet and control cabinet, which turned out to be another aspect to improve the control of the painting process. As this example shows, keeping up with technical development does not always require a totally new solution. Sometimes, all that is needed is a small and inconspicuous component to link different protocol worlds, simplifying process control and reducing costs at the same time.