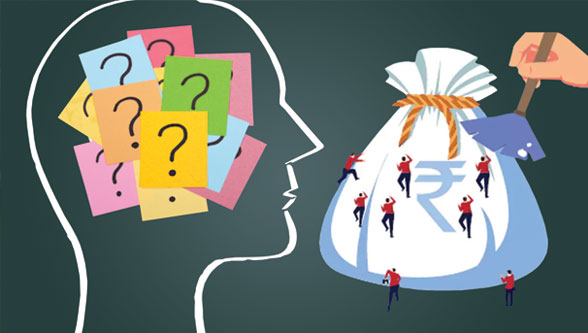 The Union Budget 2020 has been a wishy-washy exercise to put it mildly. After delivering a two-hour-forty minute speech nobody could understand exactly what the Union Finance Minister, Mrs Nirmala Sitharaman, had tried to convey to the Parliament and the country. She spoke about green shoots being visible in the NSO report recently. She has already informed that there will be roll-backs but why present such schemes which have to be rolled back? And the NSO report has already proved Mrs Sitharaman wrong about her green shoots sighting. Article by Arijit Nag

If Budget 2020 left you confused about whether you’re better off or worse, take heart. You’re not alone. If the clarifications since Budget day are anything to go by, even the finance ministry seems to be scratching its head over several announcements made by Sitharaman in India’s longest ever budget speech.

Retail inflation soared in January 2020 to 7.59 per cent, the highest level since May 2014 as factory production went down by 0.3 per cent in December, darkening growth prospects further in an economy that is struggling along at its slowest pace in six years.

The latest data release by the National Statistical Office snubbed claims about the seven green shoots of recovery that finance minister Nirmala Sitharaman spoke about in Parliament recently while trying to defend her recent budget that critics have trashed for failing to do enough to revive the faltering economy.

“Industrial activity has seen a rebound. In November 2019, the IIP numbers have registered a positive growth of 1.8 per cent as compared to the contraction of 3.4 per cent in October 2019 and by 4.3 per cent in September 2019,” Sitharaman had said in the Rajya Sabha recently.

The finance minister spoke too soon: while factory output shrank once again in December, the manufacturing sector (which has a 77.63 per cent weightage in the overall Index of Industrial Production) contracted by 1.2 per cent.

In the month of December, 16 out of the 23 industry groups in the manufacturing sector have shown negative growth as compared to the corresponding month of the previous year.

I think the first point which is really critical is to accept the fact that the government budgets are extremely dishonest as of now. It has become so bad that even certain government departments may not be in the know of what is really happening.

Faced with the challenge of revving up India’s economic slowdown, the Finance Minister took a more cautious approach presenting her second budget providing a boost to only a few select sectors which should translate to a moderate stimulus for the manufacturing sector. However, proposals for a few sectors, including electronics manufacturing, transport infrastructure and solar energy, besides increasing in certain import duties, are expected to bring some cheer.

Assuaging concerns on the slowdown in the manufacturing sector, Sitharaman said industrial activity is on the rebound. But that is really not true!

Index of industrial production (IIP) turned positive for November 2019 as against a contraction in the previous months, said the FM, adding that purchasing managers index (PMI) is also steadily moving upwards and was at 55.3 in January from 51.2 in November. However, nobody knows where the Finance Minister was sourcing her figures from. But the December figures proved that November was just an aberration which could not be sustained.

In an attempt to push growth with domestically produced goods and services, the budget has made an upward revision in import prices for footwear and furniture driven by a five per cent increase in customs duty. Additionally, there has also been a levy of health cess on import of medical equipment as corresponding devices are now being domestically manufactured in India on a significant scale and can be adequately used to further health services in aspirational districts in a cost-effective manner.

Revision in rates to support phased manufacturing plans for electric vehicles as well as mobile parts domestically is also expected to incentivise domestic manufacturers in these sectors. The push to domestic industries is also pronounced in case of technical textiles with the National Technical Textile Mission instituted to reverse the $16 billion imports in this sector. Furthermore, the downward revision in customs duty on inputs and raw materials like fuse, chemicals and anti-plastics is expected to further drive the manufacturing sector.

A day after the budget, Sitharaman said in an interview to Deccan Herald that her ministry would issue clarifications on the new personal tax regime which has become the norm since the days of Arun Jaitley.

This time around, most newspapers had muted or negative reactions to the budget, in comparison to the hyperbole that usually describes the headlines on the day after the budget.

Economists aren’t happy either with the budget. Yamini Aiyar, who heads the Centre for Policy Research, wrote in Hindustan Times that not only did the budget not have any bold ideas, it also made “baffling” choices. “The government has got both the diagnosis and the prescription of the current slowdown, completely wrong,” she wrote. 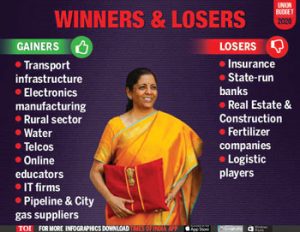 Yet what the government is bargaining with its own 1.3 billion people is unfair to put it mildly. High unemployment, firms and farmers are all paying a price for the fiscal deficit, which is closer to five per cent than the 3.8 per cent that New Delhi is acknowledging for this year and a far cry from the 3.5 per cent projected for the next year. This is another example of the government fudging the data for public consumption and this fudge comes at a price: With the government pouncing upon household savings, the cost of capital can hardly fall, even with the central bank furiously cutting its policy rate and buying longer-dated bonds.

Finally, the government is talking about manufacturing-led exports. That’s the good news. However, in the same breath, it is getting increasingly protectionist on the trade front, by increasing customs duties and planning other measures. The old cliché, Be Indian Buy Indian, is making a comeback in another version. The problem is, wanting to increase exports and being increasingly protectionist at the same time work at cross purposes. And that’s the bad news.

In fact, increasing customs duties goes against the grain of what has been done since 1991, which is duties have been cut all along. This boosted exports as well as growth all along.

Finance minister Nirmala Sitharaman summarised the situation perfectly in her budget speech: “India needs to manufacture networked products which will make it a part of global value chains.”

The Union power and renewable energy minister RK Singh asserted the government was determined to fix the shortcomings of the sector and would soon announce schemes to revive the ailing discoms, waive off discom dues and amend the Electricity Act to introduce hefty penalties on reneging of any kind of contract. Amazingly, the government did nothing in this regard during its first five-year term.

Hailing the budget, Singh said the expanded Kusum scheme to solarise agriculture pumps would make agriculture sector diesel free and reduce the cost of irrigation of farmers to one fourth or a fifth of the present costs. He went to say that farmers can earn Rs 60,000 annually with the installation of solar plants on barren land. In the Budget the FM has announced assistance to farmers in setting up such plants.

The budget allocated Rs 22,000 crore for the power and renewable sector, close to last year’s level which does not really give a lot of comfort to the sector.

With a focus on technology and innovation, Budget 2020 tries to lay the foundation for India’s future. The allocation of Rs 3000 crore for skills development should help bridge a sizable technological skills gap in the country and enhance the global competitiveness of small and mid-size businesses in the country, which employ 40 per cent of India’s total workforce and contribute nearly 30 per cent to India’s economy. All efforts that positively drive the key levers of modern business are definitely welcome such as innovation, growth and efficiency. However, grave doubts continue to remain!

Article by – Arijit nag
Arijit Nag is a freelance journalist who writes on various aspects of the economy and current affairs. Read more article of Arijit Nag