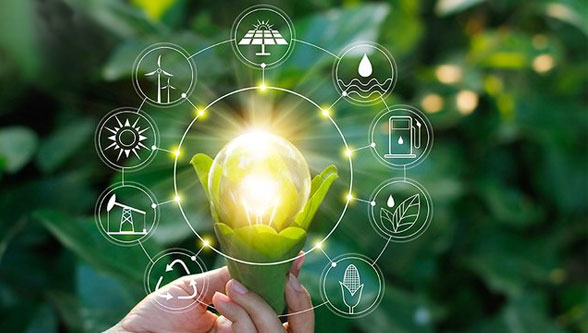 In India, December 14 is observed as the National Energy Conservation Day.Quite naturally this day is gaining importance with every passing day. Along with transforming the energy source from fossil to renewable has also become imperative that energy conservation is given top priority.In this article we will take a detailed look at energy conservation…
Article by – Arijit Nag

While fossil fuels come from the earth’s crust, green energy comes from natural sources such as sunlight, wind, rain, tides, plants, algae and geothermal heat. And the way things have been moving energy conservation has become an acute imperative.

As we know, the Law of Conservation of Energy says energy can neither be created nor destroyed, only transformed from one form to another. This applies to light energy, too. Energy conservation essentially means to reduce the consumption of energy by using less of some service or reducing the amount of some service used.

According to the Climate Change Performance Index (CCPI), India is among the top 10 nations based on parameters like renewable power and energy use efficiency. This is a remarkable achievement in view of India’s resolve to generate 175 GW of clean energy by 2022.

The country already generates around 84 GW of clean energy capacity, including 32 GW of solar and 37 GW of wind energy. Currently, India’s total installed power generation capacity is around 365 GW.

On 9 July, 2019, the Bureau of Energy Efficiency (BEE) and Central Public Works Department (CPWD) signed a MoU to make 150 buildings energy efficient, which would save almost 50 million units per annum.

On an average, buildings can consume about 40 per cent of a city’s energy and, therefore, have a significant potential for energy savings with a wide range of options. Cities can adopt relatively low-cost and modulated measures to improve building envelope (e.g. white roofs, sun shading, and weather stripping), electrical appliances, and office equipment initially.

Recently, at an event Madhya Pradesh energy minister Priyavrat Singh said that the aim of celebrating Energy Conservation Week is to generate awareness among consumers towards energy conservation. Energy conservation does not mean that energy or electricity should not be used, but rather that electricity is used efficiently and judiciously. It has been proved through various surveys that huge amount of electricity is wasted due to negligence of the consumer.

Furthermore, Indian Railways plans to source about 1.2 GW power from renewable energy, i.e. green energy, sources by 2021-22 across all zones and production units. Of this, about 1,000 MW, or 1 GW, would come from solar and 200 MW from wind, the national transporter said in a statement issued recently.

In order to achieve this goal, 500 MW solar capacity will be installed on the roofs of railway department buildings which will be used to meet non-traction loads at railway stations. The remaining 500 MW land-based solar plants will be used to meet both traction and non-traction requirements. “South Central Railway is one of the zones actively implementing several measures aimed at energy conservation by harnessing renewable energy,” said a statement of the Indian Railways.

I’d like to cite five corporate houses in India which have initiated significant measures towards energy conservation.

1) TVS Motor Company, a multinational motorcycle company based out of Chennai, has committed itself to conserving energy by developing suitable technology, products and business solutions. The company is planning to invest around Rs 6 crore during 2019-20 to enhance solar and wind power under ‘Group Captive Mode’ and implement other planned energy efficiency measures.

2) Wipro uses nearly 40 per cent of its electricity requirement from renewable energy sources, a metric that has doubled in the last five years. When this is combined with their significant investments in building design and energy efficiency, the resultant outcome has been a steady reduction in their greenhouse gas footprint. Wipro was one of the pioneering organisations to adopt science-based targets for their climate change programme, which is a global initiative in line with the Paris Agreement.

The company’s EcoVision programme intends to provide sustainable solutions. The ‘Healthy people, Sustainable planet’ programme, running from 2016-2020, hopes to create value for customers through sustainable products and services, operations, and driving sustainability through their supply chain. 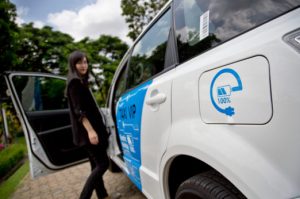 A Chinese-made BYD electric car, part of the first fleet of electric taxis that entered service in Thailand in September 2018, at a park in Bangkok, Thailand. China is the world’s No. 1 electric vehicle market and its stand-out success is automaker BYD, which stands for “Build Your Dreams”. Gemunu Amarasinghe / AP

4) With its headquarters in Mumbai, L&T is one of the most respected companies in the private sector, working on technology, engineering, construction, and manufacturing. The company has taken a number of initiatives under its sustainability programme.

It aims to build India’s infrastructure by working in the areas of energy and water efficiency, climate change and harnessing renewable sources, green product portfolio, material conservation, zero accident goal, and health and wellbeing. It has also drawn up a sustainability roadmap, which was curated after much thought, analysis, and lessons from previous sustainability roadmaps. L&T aims to double energy conservation by 2021. The company achieved a 9.4 per cent increase in energy conservation in the year 2016-2017.

The company is leading the way by starting a number of projects in its own premises to conserve energy. Switching to Variable Frequency Drive from constant speed drives in large pumps across the power plants. Switching to energy efficient lighting likes CFLs and standardising the AC temperatures at 24 degrees Celsius. It has also replaced electric water heaters with solar water heaters in canteens.

L&T has also introduced solar-based LED lighting in selected areas, LED-based street lighting, electric vehicles for internal transport within plant premises. The company insists on recycling of paper and bio methane from canteen waste as well as rainwater harvesting at various locations to tap rainwater and use for service purposes.

5) Tata Power Limited is an electric utility company based out of Mumbai, and is a part of the TATA group. The company, which provides electrical solutions across India, is one of the country’s largest integrated power companies. In February 2017 TATA Power became the first Indian company to ship over one GW solar models. 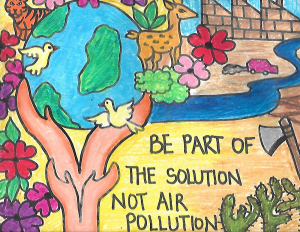 China is leading the green revolution in various ways. China has become the world leader in manufacturing of electric cars. It has invested heavily in a national fleet of electric buses for public transportation. The People’s Republic has the highest afforestation rate in the world. It leads in the research, development and manufacturing of renewable energy sources and is the world’s top electricity producer from renewable energy sources, with over double the generation of the second-ranking country, the U.S.

As a follow-up to decades of progress on environmental concerns, in October, 2019, the Central Committee of the Communist Party of China adopted a policy framework to “promote highly efficient utilisation of resources, improve institutions for ecological restoration and conservation, and strengthen the accountability system. This framework is meant to expand China’s two-pronged approach to clean up its environment, including the strict regulation of pollutant discharges and cleaning up existing pollutants.

Even as the Narendra Modi-led government has announced the detailed plan to not only reach but to cross the 175 GW renewable energy capacity target by 2022, the proposed carbon tax waiver may act as a roadblock in its ambitious plans. With the new proposal, the government aims to give more money in the hands of industrialists to arrange better equipment to control carbon-emission. However, with this new ease, the coal-powered sector may regain momentum that was halted to a certain extent by cancellations of projects and stiff competition from non-hydro renewable sources after the cost of renewables in India fell below that of coal and gas.

Research firm Fitch Solutions has said that the Indian Government’s proposed carbon tax waiver on coal may pose substantial downside risks to the country’s renewable sector growth. Earlier, the government had proposed to waive carbon taxes on coal by Rs 400 per tonne. Lower tariffs have already made India’s renewable energy market too stiff to compete and now the increased possibility of rising profit margins may further demoralise the renewable businesses in India.

More than 60 per cent of the power generated in India is still obtained from non-renewable sources such as coal, lignite, gas, and diesel, out of which coal has the maximum share. Energy obtained from coal is nearly 54 per cent of the total energy produced in the country, according to the Central Electricity Authority.

Incidentally, the government had also set a deadline of December 2019 to cut emissions of sulphur dioxide but the coal-powered plants failed to comply. They also showed their high debt levels and rising payment dues from the government-owned power discoms. The government data also showed that the dues of power producers increased by over $11 billion by October last year. And all this doesn’t give a very encouraging feeling.

Article by-
Arijit Nag is a freelance journalist who writes on various aspects of the economy and current affairs.

Philips Lighting reiterates its commitment to ‘Make in India’ through…