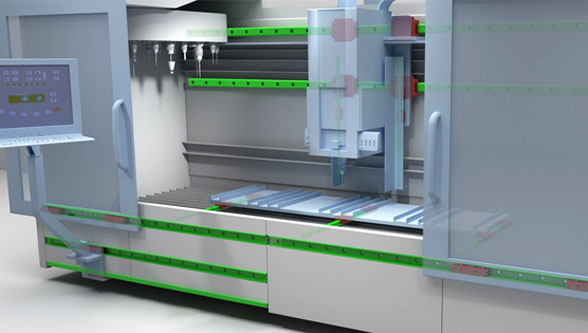 The makers of CNC machine tools are not known for skimping on their motion control components, especially those related to spindle movements. Yet not every motion on a CNC machine is mission critical. In fact, most machines have one or more axes that, unlike the spindle, do not require high degrees of accuracy and precision.

These axes can include doors and other auxiliary systems not associ- ated with cutting. By picking an appropriate motion solution for these auxiliary axes, machine builders can not only take some cost out of a CNC machine but also improve that machine’s reliability in the field.

Doors, in particular, are an axis that are often designed with less- than-ideal motion components. From an accuracy standpoint, door motion may seem like an open and shut case, but they do present some challenging design issues of their own. They tend to be large sheet-metal structures that are subject to deflection and alignment problems. They also have to work reliably in a contamination-prone environment filled with metal chips and cutting fluids.

These size and contamination issues can be especially hard on linear bearings. Engineers who work in machine tools will sometimes reflexively specify recirculating ball linear bearings, in part because of familiarity. Yet this style of bearing is not the best choice when it comes to creating a dependable, cost-effec- tive door.

Rollon has developed an alterna- tive bearing solution for doors and related auxiliary applications. It’s based on Compact Rail bearings, which are both self-aligning and resistant to contamination.

Self-aligning. Aligning linear bear- ings is usually a difficult process that takes place during the machine building phase. Machine builders must first machine mounting sur- faces to near perfect flatness. Then they’ll install bearings using fixtures to ensure that rails are aligned horizontally and vertically. Both of those steps can add significant time and cost to the machine.

And in the case of machine tool doors, both of those steps may be both ineffective and unnecessary. They’re ineffective because the doors tend to be large sheet metal structures that will deflect in use, undoing even the most careful installation techniques. And they’re unnecessary because self-aligning bearings can accommodate deflec- tion without the need for the expen- sive machining or fussy installation procedures.

Rollon’s Compact Rail system gets its self-alignment capability from the way that its large roller bearings interact with a set of rail profiles. The profiles are designed to allow the rollers an extra degree of free- dom or two to offset misalignment between rails.

In the case of machine tool doors, an emerging solution combines Compact Rail’s U and K rail profile to support the slider (See Figure 1). The U-style rail has a flat raceway that allows a roller freedom trans- late in an out relative to the axial direction of the rail. The K-style rail has a geometry that allows for limited angular rotation of the roller, while still offering precise linear guidance. Together, these rails can absorb significant alignment errors in two axes: Parallel- ism on the horizontal plane and height differences between rails in the vertical plane

How significant? It depends on the distance between rails. For example, at a two-meter span be- tween rails, the system can absorb parallelism errors up to 4 mm in the horizontal plane and differences in rail height of +/- 50 mm. (See Table 1 for self-alignment capabilities at other rail distances).

With the Compact Rail system, the source of the alignment errors is not important. Whether the errors are caused by the machine structure, in- stallation or deflection in the field, the Compact Rail will adjust and do so without affecting the wear char- acteristics or lifespan of the bearing.

Low Closing Force. Compact Rails additionally make the doors easy to open and close–and not just be- cause design tolerates misalignment without impeding motion. Compact Rails also contribute to the smooth door motion because they have a low coefficient of friction (COF). The typical COF for a Compact

Contamination Resistant. Another important linear bearing attribute important in doors and other ma- chine tool auxiliary axes is contamination resistance. Recirculating ball linear bearings, which have little clearance between balls and raceways, have historically been susceptible to contamination related failures and require elaborate protective measures. Making matters worse, metal chips are among the most damaging contaminants in the industrial world.

Rollon’s Compact Rail keeps contamination at bay in a few ways. It has small features, like seals and wipers, that minimize contaminants on the rails. Installation tricks, such as installing rails upside down, can further reduce contamination levels.

Mostly, though, Compact Rail’s contamination resistance rests on its overall design. Its small ball bear- ings are permanently sealed within larger rollers. And the rollers have a large size relative to typical con- taminants. They can roll over many chips that would stop a recirculating ball bearing in its tracks.