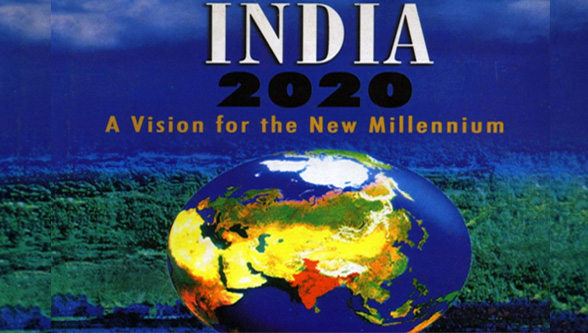 Two decades ago Vision 2020 was envisaged by a brilliant scientist who later went on to become the President of the country, Dr APJ Abdul Kalam. Unfortunately, he could not witness the metamorphosis of his vision into reality as he passed away in 2015. This is the year when the Vision was supposed to come to fruition and hence, it is time to take stock. So far, however, it has been a mixed saga of hits and misses…..
Article by – Arijit Nag

The year 2000 was exhilarating. There was huge excitement around the beginning of a new millennium, with many of us envisioning a technology-led future and a brave new world. The Millennium Bug was much more than just the Y2K problem—it was synonymous with an endeavour to crack most of the persistent problems that the 20th century, despite its enormous advancements in trade and economy, had not been able to resolve. Spurred on by A.P.J. Abdul Kalam, who would go on to become President, the now-defunct Planning Commission came up with an omnibus document that defined and articulated India’s vision 2020.

However, 20 years later, it is time to see how the country has performed. What did the forecasts say then? Did we do enough to meet the goals that we had set out to achieve? Were we oblivious of the challenges to growth and development that would appear without notice in the 21st century? What stages of development did India reach and where did we fail completely?

India’s Vision 2020 was originally a document prepared by Nivetha SK, the Technology Information, Forecasting and Assessment Council (TIFAC) of India’s Department of Science and Technology under the chairmanship of Dr A. P. J. Abdul Kalam along with a team of around 500 experts. The document is further detailed in the book “India 2020: A Vision for the New Millennium”, which Dr.Kalam co-authored with Y. S. Rajan.

Dr Kalam described the plan as:”In an effort to transform the country into a developed nation, five areas in combination have been identified based on India’s core competencies, massive natural resources and youthful manpower for integrated action to double the GDP growth rate and realise the Vision of a Developed India.”

Over the past two decades, a major chunk of manufacturing went to China and India hoped to follow suit by increasing manufacturing’s share in the GDP to 25 per cent by 2022. This was expected to add another 100 million jobs. However, manufacturing did not go beyond 16.1 per cent of GDP, within industry that accounts for 29 per cent of GDP. Agriculture contributes 17 per cent and the dominant services sector makes up the balance.

In India, the consensus at the turn of century was that annual GDP growth rate would be between 8.5 per cent and nine per cent over the next two decades. This would result in quadrupling of the real per capita income and poverty would be completely eliminated. It was forecast that India would move from being a least developed country (LDC) to an upper-middle-income one and India’s rank in the World Bank’s classification of economies would go from 11th in 2000 to fourth by 2020.

One must admit that in this regard, India did move pretty fast, pulling millions of people out of poverty. It was also no longer an LDC even by 2010. However, that was not enough to enter the upper-income bracket where China and Brazil are positioned. India remains a lower-middle- income economy.

According to the 2019 Multidimensional Poverty Index (MPI) of the United Nations, India lifted 271 million people out of poverty in the decade between 2006 and 2016. This was the fastest reduction in the MPI numbers during the period, with strong improvements in areas such as assets, cooking fuel, sanitation and nutrition. However, poverty could not be eliminated, as perceived 20 years ago. Estimates on the number of poor vary between 21 per cent of population as per the 2011 Census and 30 per cent as Brookings Institution’s recent calculations suggested.

In view of the 65 per cent of the population in the working age group, India in 2000 knew that providing employment opportunities would be the key to sustaining growth. The data on jobs is dismal as the country has been seeing jobless growth for nearly two decades and now the employment data is ominous. The rate of unemployment is at a 45-year high, with the educated unemployment rate rising to more than 23 per cent. Nearly 11 million youth lost their jobs due to demonetisation in 2016 and the hurried implementation of the goods and services tax in 2017.

The vision of training 500 million people with skills to feed a growing economy’s staffing requirements was sadly never realised. The percentage of skilled youth moved up marginally from two per cent in 2000 to 4.4 per cent by 2019 despite Prime Minister Modi’s pet project “Skill India”. The pithy and evocative “Jobs for All” slogan articulated in 2000 remains a distant dream, receding further as automation, sectoral shifts and poor educational outcomes hamper any scope for improvement.

The education story is a mixed one. Although enrolments have gone up significantly, with big moneys being poured into midday meal schemes, Sarva Shiksha Abhiyan and village school buildings things are far from satisfactory. The All India Survey on Higher Education 2018-19 gives extensive data on students and their sojourn through school. However, what is really a matter of concern is that the journey from primary school to college is very tough and despite almost complete enrolment at the primary level, very few youth reach college.

The report gives an update on higher education. Today we have 993 universities compared to 642 universities in 2011-12 and 229 in 1998. The National Knowledge Commission had estimated that the country would require at least 1,500 universities by 2020 to provide education comfortably to its youth, so we are still more than 500 universities short and possibilities are that this gap won’t be filled.

Only 25 per cent of our youth in the 18-24 age group are going to college or university. The higher education system awards a little less than 10 million degrees every year and 65 per cent of these go to undergraduate students. Most of the students with such academic degrees learn very little in terms of knowledge, life skills or any other skills relevant to employability.

India produces fewer than 200,000 MPhil/PhD degree holders every year who are presumed to have some degree of research skills. It’s no wonder that the level of teaching in our universities and the quality of research that comes out are of very inferior quality.

In the year 1992, according to data from the Food and Agriculture Organisation, there were 240 million undernourished people in India. In 2012, the figure went down to 217 million, a decline of more than nine per cent. However, the vision of “Food for All” and “Zero Malnourishment” has been a monumental failure. India tops the world hunger chart with more than 200 million citizens sleeping hungry every night.

The Global Hunger Index (GHI) is designed to measure and track hunger at the global, regional, and national levels comprehensively. In the 2019 GHI, India ranks 102nd out of 117 qualifying countries. With a score of 30.3, India suffers from an alarming level of hunger. In the 2019 GHI, our neighbours Bangladesh at 88 and Pakistan at 94 performed better. Sri Lanka at 66 and Nepal at 73 are way better, too. The only country in the region worse than India is Afghanistan at 108.

In the Vision 2020 document we had promised “Health for All”. But with huge supply-side problems, this vision is far from being realised. With 17.5 per cent of the world’s population, Indians account for 20 per cent of the global disease burden. The private sector caters to 75 per cent of outpatient care and 60 per cent of inpatient care. Around 60 million Indians are forced into poverty every year because they are compelled to spend nearly half their annual household income on medical needs.

A study published in the reputed medical journal, Lancet, shows that India’s doctor shortages are mind-boggling. However, there is significant regional variation—there is one government hospital bed for every 614 people in Goa compared to only one for 8,789 people in Bihar. Some six out of 10 hospitals in our poorer states do not provide intensive care, and a fourth of them have abysmal sanitation and drainage facilities. The government’s flagship programme Ayushman Bharat suffers from this gross undersupply of doctors even as it increases demand substantially.

According to the first-ever scientific study ranking countries by their levels of human capital, India ranks 158th in the world for its investments in education and healthcare. Much maligned Sudan (ranked 157th) is ahead of India and poverty-stricken Namibia (ranked 159th) is just behind in the list while the US is ranked 27th and China is at 44th. The moral behind this data is that expenditure on human development must rise substantially. Universal healthcare, easy access to quality education, elimination of hunger, provision of sanitation infrastructure, pollution control and putting an end to malnutrition were critical to turn our Vision 2020 into reality and take India into the next stage of development.

One leading indicator of growth and development in any economy is its urbanisation. India’s population remains largely rural, particularly in the east. With its 35 per cent urban population today, India is way behind most developed countries where the share is more than 50 per cent.

Hostility towards migrants, slowdown in interstate movement and the shrinkage of urban jobs have hampered labour mobility considerably. The $5 trillion economy that defines Prime Minister Narendra Modi’s vision for 2024 will need a far more inclusive agenda, where sharp gender gaps, lack of access to the digital world and poor quality infrastructure have to be tackled immediately.

India definitely remains an economy with great potential, but will need consistent and concerted efforts over the next 20 years if it must go on to become a developed country by 2040. The government has done moderately well going by its Vision 2020 but as I have said above, plenty remains to be done.

Arijit Nag is a freelance journalist who writes on various aspects of the economy and current affairs.
Read more article of Arijit Nag