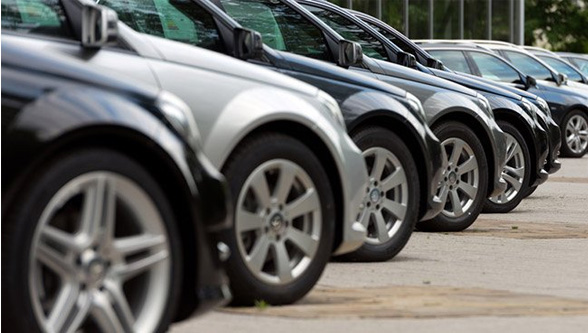 There is no denying that the economy has been completely shattered by the pandemic and the following lockdown. The 23.9 per cent contraction has broken the backbone of optimism. But still it seems that everything is not lost yet. In September things seem to be looking although the pandemic has not been arrested yet. In this article we will look at the green shoots appearing in the midst of all the devastation.

India’s manufacturing sector expanded at its fastest pace this fiscal in September as the economy opened up after the prolonged nationwide lockdown. A survey showed that demand and output both rose even as layoffs continued.

The data from the IHS Markit India Manufacturing Purchasing Managers’ Index (PMI) say it increased from 52.0 in August to 56.8 in September. This is the highest the index has reached since January 2012.

Expressing her positive reaction, Pollyanna de Lima, a director at IHS Markit, said, “manufacturing continued to move in the right direction, with PMI data for September highlighting many positives. After restrictions were lifted, factories went full steam ahead for production, supported by a surge in new work.” 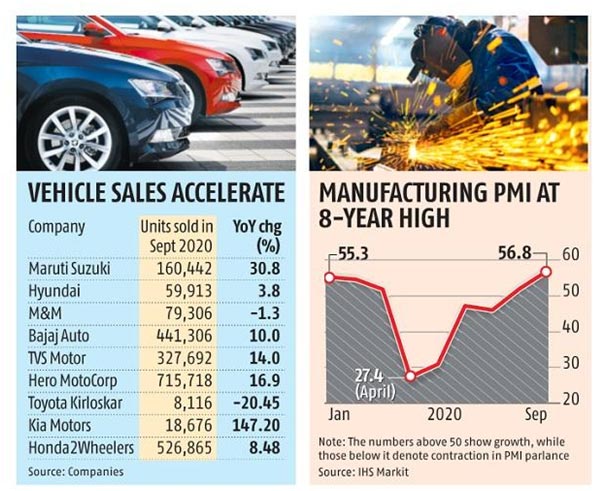 Incidentally, the index had slipped in April into contraction mode after remaining positive for 32 consecutive months. According to the PMI, a print above 50 means expansion, while a score below that denotes contraction.

Darren Aw of Capital Economics went on to say that the hike in September’s manufacturing PMI and reaching its highest level in over eight years is a sure sign that the recovery is on. However, with India being the virus epicentre now, containment measures are likely to remain in place for a long time yet, which would dampen manufacturing prospects.

“We can see from the emerging figures that both activity and sentiment have improved in September 2020 and a fragmented recovery is underway. Hopefully, the contraction in GDP will narrow down to 12.4 per cent in the second quarter of 2021,” Aditi Nayar, principal economist of Icra, said.

In a significant development, automobile companies like Maruti Suzuki and Hyundai Motor led the recovery march of passenger vehicle (PV) sales in the domestic market in September, posting high double-digit growth ahead of the festive season. Apart from the companies mentioned above, Tata Motors, Honda, Skoda and Kia Motors have also reported a rise in September sales.

However, sales fell at Mahindra & Mahindra and Toyota Kirloskar Motor. Both said demand was picking up and there was a lot more confidence among the dealers.

However, auto analyst Shamsher Dewan cautioned, “It is expected that a low base, upbeat rural sentiments and increased preference for personal mobility would support retail demand in the festive season. Nevertheless, the uncertainty surrounding the pandemic continues to persist and recovery is expected to be a gradual process.”

Meanwhile, Hyundai Motor India posted a 24 per cent growth in sales at 50,313 units against 40,705 units sold in the same month last year. Brands like Creta, Venue and Nios generated demand for the Korean brand.

On the other hand, Kia Motors registered sales of 18,676 units, up 147 per cent, from 7,754 units sold in the same month last year. Incidentally, this is Kia’s highest-ever monthly sales after the company entered the country a year ago.

Kia Motors (India) MD and CEO Kookhyun Shim emphasised that the Indian auto market was recovering at a better pace than expected and his company was progressing according to plan.

Meanwhile, the Goods and Services Tax (GST) collection touched its highest level so far this fiscal in September at Rs 95,480 crore as the unlocking of businesses lifts demand and factory activity.

The increase in collection comes ahead of the GST Council meeting on Monday (Oct. 5, 2020) where the issue of compensation to states and the borrowing options given by the Centre are likely to be debated. Also, the Comptroller and Auditor General’s criticism of the Narendra Modi government for short crediting Rs 47,272 crore of compensation due to the states is expected to be raked up during the meeting.

September revenues are four per cent higher than the total GST collection in the corresponding period last year.

This marginal, increase in GST collections compared with the previous year is another indication that the economic recovery process has begun, as some large states have also reported increased collections of the GST. If the present trend continues, we can be hopeful of significant increases in the months to come.

There is also good news on the export front. Breaking out of the six-month long contraction period, the country’s exports grew 5.27 per cent to $27.4 billion in September.