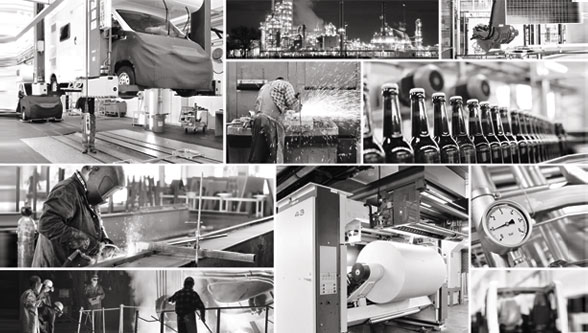 With shrinking investments, piling inventories and a clueless government, things have turned extremely bleak for the manufacturing sector. There seems no immediate relief in sight with the government coming up with ad hoc solutions.
… Article by Arijit Nag

As the downward slide of the economy continues it is time that we do some sectoral introspection. All the sectors of the economy have been impacted negatively over the last couple of years with automobile, realty and agriculture being the worst. Manufacturing, too, has taken a severe beating over the last few quarters.

The Indian manufacturing sector currently contributes 16-17 per cent to the GDP and provides employment to around 12 per cent (2014 data) of the country’s workforce. Various studies have estimated that every job created in manufacturing has a multiplier effect in creating two to three jobs in the services sector.

However, despite the transformation of the economic structure India could not really become a manufacturing hub like China became. India’s manufacturing sector contracted to its lowest level since 2012.

Industrial output fell by 1.1 per cent in August 2019, (https://www.bloombergquint.com/economy-finance/iip-indias-industrial-output-contracts-on-manufacturing-slump) compared to the same period last year, defying the predictions of economists who expected it to grow by 1.7 per cent. This negative growth was primarily the result of the slowdown in the electricity and manufacturing sectors. This was the steepest fall in over six years, according to chief economist at India Ratings and Research, Devendra Kumar Pant.

Trends did not change in September and the slide continued. Many so-called economists forecast that growth would pick up with the approaching festive season. But alas, nothing of the sort happened. There were heavy speculations that the trade war between China and the US would yield unprecedented gains for India.

Ashwath Ram, Managing Director, Cummins India Limited, said, the current sluggishness in the Indian economy arises from several factors including the prevailing liquidity situation, delays in awarding of infrastructure projects, banking sector including the shadow banks continuing to sort through their funding constraints. These factors have all resulted in reduction in demand across our key segments in the domestic business. In our estimation, this is likely to play out further for some time with a gradual revival thereafter. The government has already undertaken significant actions to boost the economy, including allocating incremental funds to the execution of infrastructure projects, easing out liquidity as well as reduction in corporate tax rate, accompanied by interest rate cuts.”

The growth rate in September and August has been the slowest since May 2018. This has been a cause of great worry for the government and policymakers. Overall demand only rose marginally in September, hurt by almost no growth in exports, and firms barely increased employees last month, a survey showed.

Fitch Ratings on Thursday last pared down the growth forecast of India’s GDP in the current fiscal to 5.5 per cent, from its earlier prediction of 6.6 per cent, saying a large credit squeeze emanating from shadow banks has pushed economic growth to a six year low. Interestingly, Fitch’s figure is lower than that of the Indian central bank which has forecast 6.1 per cent for the current fiscal.

However, some banks, aligned with the government, have started expressing optimism that the GDP growth rate will touch seven per cent by the next fiscal and eight per cent thereafter. Unfortunately, they are yet to come up with any credible reason for such a surge in the economy.

We have to carefully watch the data emanating over the next quarter to come up with a credible forecast. Unfortunately, the current government has been attempting to cook its account books to cover up its failures. In the very first year after coming to power the government tweaked with the base year for calculating the gross domestic product. Unfortunately, it didn’t serve the purpose of covering up the ineptitude of the government.

According to a 2015-16 report of a business newspaper, Prime Minister Narendra Modi’s pet project, Make in India, failed to make any positive impact on the country’s manufacturing sector. Official data show that during 2015-16, the first full financial year of the Modi government, three non-manufacturing sectors – services, computer software and hardware, and trading, attracted more than 41.5 per cent of the FDI inflow, whereas core manufacturing sectors such as automobiles, chemicals, power, pharma and construction received a mere 14 per cent of the total FDI.

However, the government has come up with extensive advertisements claiming the success of the Prime Minister’s pet scheme. Similarly, exports have also remained stagnant and the balance of payment improvement is on account of lesser imports.

The current slack in the manufacturing sector is not an overnight development. Things started going downhill from 2015-16. According to data received from official sources, FDI into each of the three key manufacturing sectors registered a sharp decline in 2015-16 vis-a-vis 2014-15. Investments into the automobile industry, for example, fell from a little over $2.7 billion to $2.5 billion in the period mentioned above. The pharma and construction sectors saw even sharper declines in investments. While foreign investments into pharma companies nearly halved, the construction sector attracted less than a sixth of foreign money in 2015-16, as compared to the previous year.

Every economy goes through cycles. Even the Great Depression of 1929-30 did not last forever but inflicted massive damage which took decades to recover. But there must be proper policies to deal with such adversities. Unfortunately, under the current circumstances our government seems completely clueless. The powers that be have been manipulating numbers and coming up with knee-jerk solutions which may work for a little while but in the long run won’t survive.

A paradigm shift from the current policies is required.  Prime Minister Modi will be well advised to begin the recovery process. There seems to be an acute shortage of truly qualified people in the current government who can be trusted to overcome the downward spiral of the economy.