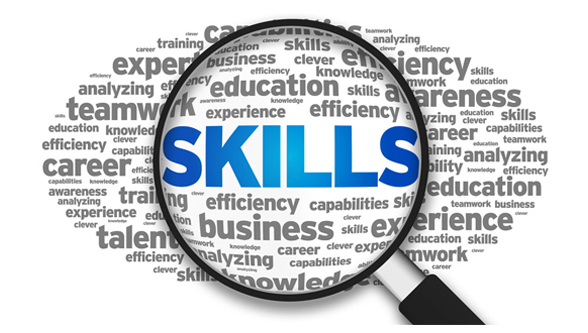 Skill India Development Mission is another ambitious project launched by Prime Minister Narendra Modi. In a bid to make India the skill capital of the world hundreds of crores have been allocated for this project. However, the implementation has been tardy leading to poor placement and skewed gender parity….
Article by Arijit Nag 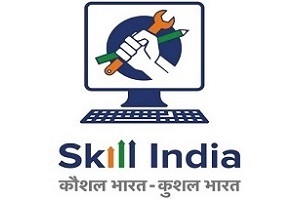 Indian Prime Minister Narendra Modi had a dream. He wanted to turn his nation into the skill capital of the world. He dreamt of providing millions of jobs to the employable youth of the country. In order to realise this dream Prime Minister Modi launched the Skill India Mission. The National Skill Development Mission was approved by the Union Cabinet on July 1, 2015, and officially launched by the Hon’ble Prime Minister on July 15, 2015 on the occasion of World Youth Skills Day. The Mission has been developed to create convergence across sectors and states in terms of skill training activities.

It’s beyond any doubt that only a skilled workforce would lead to the success of initiatives like Make in India and Digital India and smart cities. To convert this vision into reality, India needs to create a skilled and productive workforce matching international standards of quality and productivity through integration of skills and training along with education.

Unfortunately, no evaluation was conducted of Pradhan Mantri Kaushal Vikas Yojana (PMKVY) 2015 (the first version of the scheme) to find out the outcomes of the scheme and whether it was serving the twin purpose of providing employment to youth and meeting the skill needs of the industry before launching such an ambitious scheme.

The focus of PMKVY has been largely on the short-term skill courses, resulting in low placements. There has been an over emphasis on this scheme and hence it is seen as the answer to all skill-related issues.

Incidentally, India is currently facing record levels of unemployment. The Centre for Monitoring Indian Economy (CMIE) reported in October, the countrywide unemployment rate had risen to a three-year high of 8.5 per cent.

The last official government data on jobs, which was inordinately delayed in releasing by the government, the National Sample Survey Office’s (NSSO) jobs survey for 2017-18, showed that unemployment is at a 45-year peak. According to the same report, the unemployment rate was as much as 33 per cent for India’s skilled youth between 15 and 29 years of age.

The Skill India Mission is lopsided in another aspect and that is gender parity. Of the seven crore persons of working age (15-59 years)—5.9 crores or 84.3 per cent of who are projected to be in the age group of 15-30 years—that the National Skills Development Corporation estimates will join India’s workforce by 2023, only one in five is expected to be a female. While this 20.1 per cent female labour force participation rate between 2019 and 2023 is higher than the 16.4 per cent projected by the Periodic Labour Force Survey for 2017-18 for the 15-29 year age group, it highlights how severe the gender imbalance is in India’s labour market. Unfortunately, India lags far behind countries like China (61 per cent), Vietnam (73 per cent), Singapore (60 per cent), and even Bangladesh (36 per cent), Libya (26 per cent), and Pakistan (24 per cent).

However, the skill level of women of working age is also a significant contributing factor. For instance, it is difficult for women from the lower economic strata to find gainful formal employment since they are often illiterate/uneducated. Even basic vocational training of the kind that the Skill India Mission endeavours to impart, such as tailoring, driving, or basic computer skills, would go a long way in empowering the women. To ensure the participation of such women in the labour force, re-skilling and up-skilling them is crucial, apart from ensuring the availability of childcare centres at the workplace, and zero tolerance to workplace sexual and other harassment.

The Ministry of Skill Development and Entrepreneurship is looking to enhance the role of sector skills councils to assess demand generation in the informal sector as well. “Earlier the participation was limited from states and MSMEs, but we will now increase their participation to account for local context and skilled needs of the informal sector,” the draft plan of the Ministry of Skill Development and Entrepreneurship said.

It is worth mentioning here that India has 54 per cent of its total population below 25 years of age. Over the next 20 years, the labour force in the industrialised world is expected to decline by four per cent, while in India it will increase by 32 per cent who are not sufficiently skilled and employable.

A conservative estimated figure shows that 104.62 million fresh entrants to the workforce need to be skilled by 2022 in addition to the 298.25 million working persons needing skill training. 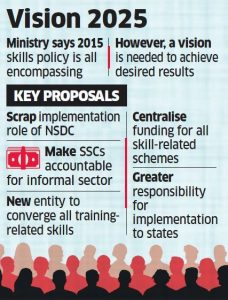 Another remarkable feature of the ‘Skill India’ programme would be to create a hallmark called ‘Rural India Skill’, so as to standardise and certify the training process.

However, the targets allocated to them were very high and without regard to any sectoral requirement. Everybody was chasing numbers without providing employment to the youth or meeting industry needs.

Meanwhile, the Comptroller and Auditor General (CAG) have pointed out flaws in the design and operations of the NSDC and National Skill Development Fund which has resulted in falling short of skill development goals. Majority of them also could not achieve the placement targets for the trained persons.

The government-appointed Sharada Prasad Committee held the NSDC responsible for poor implementation of the Standard Training Assessment and Reward (STAR) programme. It highlighted that only 8.5 per cent of the persons trained were able to get employment. That is what has been claimed by NSDC.

The Committee report has found fault with the STAR scheme on several counts. STAR offered school dropouts financial incentives to acquire new skills, but the report said that “of those who got their results, only 24 per cent have received certificates and less than 18 per cent have received monetary rewards. This is despite the fact that 80 per cent candidates reported having bank accounts, and 91.3 per cent stated they had Aadhaar numbers”.

As per its original mandate, the NSDC should be mobilising resources for skill development from the industry, financial institutions, multilateral and bilateral external aid agencies, private equity providers and ministries and departments of the central government and states. But the Committee found that the NSDC did not follow any standard criteria for creation of SSCs which not only increased their number but created overlapping jurisdictions.

There have been apprehensions on how many of the 11.7 million trained in the past two years are really in jobs.

Despite being an ambitious project and close to the Prime Minister’s heart implementation of the project left a lot to be desired. Recently, on Monday i.e. Nov. 18, 2019, the government informed the Lok Sabha that out of the 64.27 lakh people who have been trained under PMKVY, the flagship project under National Skill Development Mission, only 14.43 lakh people have got placed in jobs.

This indicates that only 22.45 per cent have secured placement under PMKVY, a part of the Skill India Mission.

“Going forward NSDC (National Skills Development Corporation) will cease to play the role of an implementor of Pradhan Mantri Kaushal Vikas Yojana (PMKVY) and focus on its other three roles,” the ministry has said in its draft vision document.

Against this backdrop, the government’s commitment to make India a $5-trillion economy in five years from now seems an uphill task.

Arijit Nag is a freelance journalist who writes on various aspects of the economy and current affairs.